Global Context
Throughout September forex markets have behaved in an erratic way, producing movements that seemed to have continuity but it didn’t. British Pound has been by far the currency that has generated the biggest losses in our portfolios although Canadian Dollar has also contributed with significant losses.

Analyzing the results in detail, we see that more than 60% of the drawdown has been caused by GBPUSD and GBPJPY with -6.57%, where as the pairs with Canadian Dollar (EURCAD, USDCAD and CADJPY) have had -3.30% of return. Among currencies with positive results we highlight EURJPY with + 0.64% and EURUSD with + 0.25%.

British Pound
The pound has behaved especially negative moving sharply with rumors about the conditions of a possible agreement on Brexit. These movements began with strength giving signal to our portfolios to take positions but they turned around later (in many cases also with a lot of strength giving opposite signals). For this reason, many SL were executed in both directions. We believe that these erratic movements can continue until the final Brexit conditions are known. 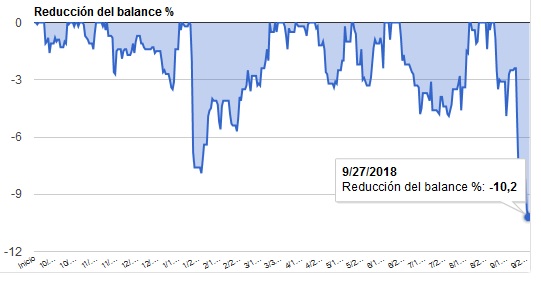 However, we would like to clarify that this is not the biggest drawdown of Long Vision FX portfolio. Our largest drawdown happened at the end of January 2016 and it was 18% (look at chart below).

In our website and on darwin’s description we have always remarked that our objective is to keep drawdown between 15% – 20% and until now we are within those parameters. It is obvious that a break above 20% of drawdown would suppose a review of the portfolio. However, because of the significant losses are concentrated in some specific currencies, we believe that we will have to wait for the results of Brexit negotiations to see how the pound moves and if it can lose some of its behavior in terms of volatility and liquidity.

Next months
We advise not to lose the overall vision despite of the bad results of September. August has closed on new high water mark and we think we will surpass it again in the future.

Finally, we want to send the idea that nothing has changed on our way of trading. We have not taken or will take greater risks on our portfolios. Forex is a difficult and changing market and we know that sometimes this kind of situation happens until important movements are defined.