The underlying account of LVS in Darwinex closed Q1 of 2019 with a slight profit of +0.19% (floating P/L included). During these months, the main economic issues we had at the end of 2018 have marked the market guidelines throughout the quarter. The expected date for Brexit (March 29th) has been delayed due to lack of a clear agreement, adding uncertainty to FX markets. In addition you have to add negative data published in March on the EU area showing signs of slowdown. The ECB is forced to take measures on the matter, moving away from a rise in interest rates and granting liquidity to the banks in order the credit flows more easily.

In this scenario our portfolio has reacted erratically. After a good month in January (+7.58%) where the British pound and the yen seemed to have an important role, February has been quite disappointing (-6.20%), especially in the second half. March also began with a recovery that has been canceled in the last week of the quarter (-0.72%).

Here is a chart of closed trades during the quarter. The percentage of each currency corresponds to the negotiated lots. 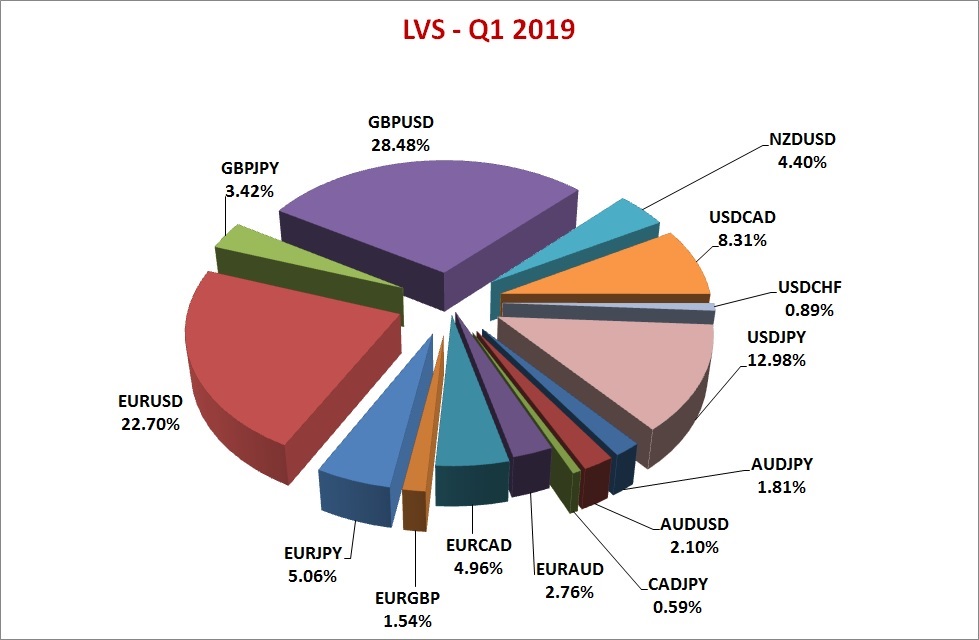 Regarding to results by currency pairs, we can highlight the good behavior of JPY and AUD pairs. On the other hand EURCAD has the most negative result during the whole quarter. GBPUSD has also been negative and we have already taken some measures we will clarify later.

Below is a picture that shows quarterly profits and losses of each FX pair traded in our underlying account. Performances also include open trades until March 31st. 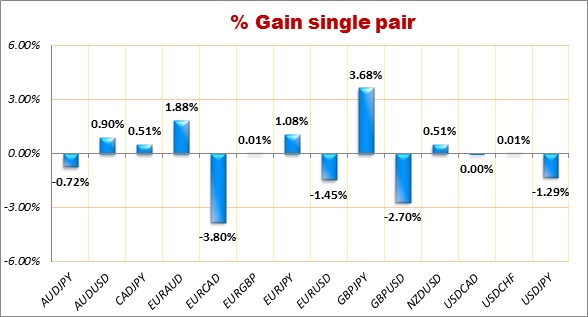 We have not yet recovered the drawdown of lasts months. You can see in red January’s recovery and, after that, February’s and March’s drop. 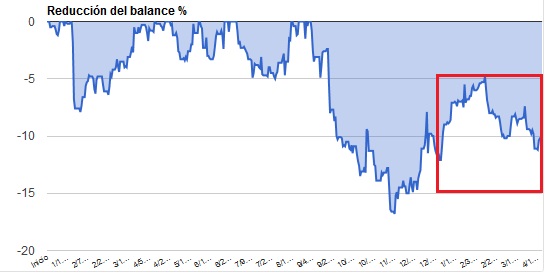 Since early 2019 we have continued with implementations we added since last year. The main new features of this quarter are the use of some time filters in LVS based on historical data of Long Vision FX’s portfolio. The goal is to get a better profit / risk ratio. From now on, we will reduce the number of trades lowering the general volatility without almost affecting the benefits. This change is something tested for more than 1 year in another personal account and the result has been quite satisfactory.

In addition, in this quarter we have updated some sets especially in lower timeframes. In March we have also continued lowering GBP’s weight in our portfolio and we will keep it at this weight until a clear agreement is reached about Brexit’s issue.

We carry on studying some strategies on indexes (CFDs) but we still don’t have enough data to draw conclusions. The option of negotiating microlots in Dax with Darwinex opens up possibilities that we will investigate with lot of interest.